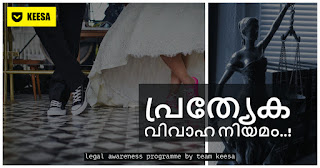 കടപ്പാട് :കേരളം സംസ്ഥാന ലീഗൽ സർവീസസ് അതോറിട്ടി
The Special Marriage Act, 1954, which applies equally to all Indian citizens irrespective of caste or creed, came into force in 1954. The Marriage Officer is a Sub-Registrar appointed by the Sub-Registrar's Office.
Special Marriage Act
According to the Special Marriage Act, the bride and groom should give notice to the District Marriage Officer in the prescribed form. The notice should be given in the presence of the District Officer who has been staying for at least 30 days from the date of notice.
As soon as the notice is received, the marriage officer should record the details of the notice in the marriage register and keep the notices as part of the records. Anyone has the right to check this without paying the fee.
A copy of the marriage notice should be displayed in any part of the officer's office for public viewing.
Persons who have objections to marriage between the persons mentioned in the notice may notify the officer within 30 days of the publication of the notice of objection.
Terms of the Special Marriage Act Terms of the Special Marriage Act
At the time of marriage the man should not have another living wife or the woman should have another husband alive.
There are barriers to marriage for those with mental problems who find it difficult to give free consent to marriage.
He has the ability to consent, but is incapable of marriage, even if he is mentally ill and unable to fulfill marital obligations and bear children.
Continuous hallucinations are disqualifying.
The groom must be 21 years of age and the bride 18 years of age at the time of marriage.
Partners should not be part of a close-knit family that is prohibited by law.
According to the notice, the marriage can be solemnized in the presence of three witnesses in the office or at any other place, after which the marriage officer will issue a marriage registration certificate.
Special Marriage Act Registration of other marriages Special Marriage Act Registration of other marriages
Any other type of marriage is also eligible to be registered subject to the conditions specified in the Special Marriage Act.
Both parties must be married and living together as spouses before applying for registration.
Neither of the two must have another living wife or another living husband.
Neither of the two should be mentally retarded or mentally ill at the time of registration.
Both must be over 21 years of age at the time of registration.
Both should not belong to prohibited blood ties.
Both spouses must be residing in the district under the jurisdiction of the Marriage Officer for not less than 30 days prior to the date of submission of the application for registration of marriage.
Special Marriage Law Divorce Special Marriage Law Divorce
A husband or wife can file for divorce for a specific reason specified in the law.
Reasons for Divorce under the Special Marriage Act
Wife or husband voluntarily having sex with another person
Commit adultery
Leaving one spouse for 2 consecutive years without the consent of the other and against the wishes without sufficient reasons
If the opposite party has been sentenced to seven years or more imprisonment for any offense under the Indian Penal Code
Cruel behavior of the opponent
Sexually Transmitted Infections (STIs) that are incurable and make family life unbearable
Non-treatable and contagious diseases
Lack of information about the partner for seven years or more is also a reason for divorce
There are special reasons for women to divorce in the Special Marriage Act. There are special reasons for women to divorce in the Special Marriage Act.
If the husband is found guilty of crimes such as rape, unnatural sex, etc. after marriage
If the marriage is not restored within a year after the court order granting alimony to the wife
If both parties are convinced that the marriage has broken down, the couple, who have been living separately for a year or more after marriage, can file for divorce by mutual consent.
Attribution: Kerala State Legal Services Authority
Tags
legal awareness marriage act
Related Article
Aakash thengumpallil